Thank You Sir, May I Have Another?

Fuck You Unbloggable Conflagration Of Horrors The Likes Of Which I've Never Seen In My Twelve Years Of Nursing Home Employment:

What a sucktastic four days that was. And the second day? That was a 14 hour doozy.

How I maintained my health and sanity through that is a mystery, and actually still yet to be seen.

I'm going to recommend to my administration that this year, for Nursing Home Week, they forgo the usual free pizza and super fancy lunch bag and give us all a free pass for a day:  To Say What We Are Really Thinking;

"Oh sure.  I'll get you a drink.  How about an ice cold glass of Go Get It Your Fucking Self".

"You need help going to the bathroom?  Sure.  Be happy to.  It may be a while though.  While you're waiting why don't you Pound Salt Up Your Ass".

"Pain medicine you say?  Haven't you heard? Life IS pain. Anyone you says different is selling something".

What doesn't feel good?   Hives on my feet.   Which appeared during hour 8 of that exciting 14 hour shift on Sunday.

Fuck You Contraceptive Device With Unfortunate Side Effects;

I loved you for a little while there.  Truly I did.

Eight months without a period, was good times.  Ask Al.  He'll tell you.

But big red angry swollen hives on the bottoms of my feet?

My ugly snakeskin Dansko's barely fit me by the end of the night.  I wanted to stick my bare feet in a snowbank.

And Monday morning?  They were still there.  And the palms of my hands had joined the party.

Thank goodness my sister works at my Gyn's office and she got me in today.

After the NP took the stupid thing out, she inquired about what form of birth control we'd be using.

"I'm going to pick up some extra shifts and get Al a couple hookers a week".

Fuck You Facilities Guy At Work;

Doing a bang up job on the parking lot there ass clown.

Just so you know; after it snows, then warms up and rains, then gets real cold again, the wet stuff, we'll call it water, freezes and turns into this stuff called ice.  It is slippery.

Ask my coworker who watched me disappear under my car as I reached for the handle, lost my feet and went down hard.  Not in the fun way.

Considering what terrible shape I am in, I should have broken my pelvis or ruptured my spleen or something.  But no.  I was fine. Didn't even score a paid day off.

And I really could have done without going to work on Tuesday.

Really?  It would be ok by me if you took a week off.

A twofer this week, a "One Two Punch" those witty meteorologists were calling it.

I would have gone grocery shopping Monday, but was tending to hive riddled hands and feet all morning, so saved my favorite chore for Tuesday.

In a fucking snowstorm.  The lesser of the two we were expected to get slammed with. Which means that the wicked smaht highway dept was holding off on plowing the roads, which were covered in four inches of snow.

Thank goodness my years of living in Vermont have made me a competent bad weather driver.  I wish I could say the same for every other shit head on the road.  My favorite is the ass hole in the SUV who needs to ride right up my ass on my twisty hilly winding road.

My favorite is NOT a sickly little Bea all but passing out in the grocery cart suddenly stricken with fever and listlessness that sent me aborting grocery mission halfway through and dragging her limp little body to the doctor.

In a fucking snowstorm.

To be diagnosed with an ear infection.

As soon as the fever broke she was fine.

And looking forward to the BIG STORM we were getting on Wednesday.  Owen was giddy that he had yet another day off from school.  But a little freaked out that we might lose power again.  He can be a pussy like that.

He was relieved when we didn't lose power.

Because it RAINED all fucking day.

Which had us cooped up in the house with me wishing I'd taken classes in conflict resolution, as all my kids do is their very best to drive each other insane.

Figures, the only ten seconds when they're not trying to kill each other, she's flipping the bird. 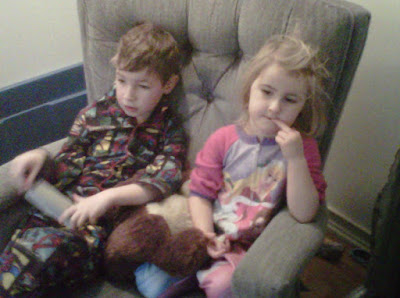 As am I, with a big Go Fuck Yourself to the past few days.

Wrote most of this in bed on laptop while pouding back wine, but left it unfinished to partake of another drunken activity that would surely have damaged laptop had it been in the vicinity.
Posted by tulpen at 1:00 PM

Email ThisBlogThis!Share to TwitterShare to FacebookShare to Pinterest
Labels: Hear that? Is The Sound Of People Unsubscribing From My Blog. See you in Hell - I'll Bring The Wine