Ummmm, Yeah. Thanks A Lot.

For the detailed message you left me the other day about Owen's vision test.  You remember the one?  When you told me how concerned you were about his vision? Especially in his left eye, AND his depth perception appears not right.

Thank you ever so much for doing such a bang up job testing my kid's eyesight.

You know what though?   I might need glasses to see but, I can read.  Yup.  Shit like books and magazines and emails.  Emails from my son's teacher even; explaining that he refused to participate in the eye exam.  He wouldn't perform a single task that YOU,  the nurse asked of him.

Admit it.  You took one look at his wonky eyes and figured his vision had to be fucked up. Right?  Right??

Well, guess what fuckbrain?  If you'd peeked into his file just a little bit, you would have seen he'd had a couple pesky brain bleeds that, if you weren't a total jackhole, would have clued you in as to why his eyes are a little wonky.

I can't fucking stand nurses.  I'm allowed to say that.

Please.  Don't try to test his hearing.  You'll never figure out how to get those dang doohickies out of his ears.

I did notice when I started backing my car out the other night that you were parked awfully close to me, like maybe three inches away.

I didn't however notice until the next morning, the HUGE dent you left in my car; presumably from when you tried to open your door.  It looks like someone took a fucking 2x4 to my car. 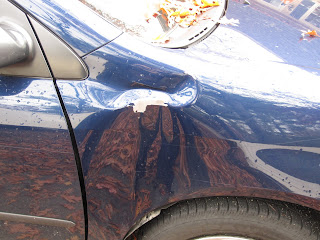 I'm just thrilled to be shelling out the $500 deductible to my insurance company just weeks before Christmas.  Who wouldn't love that?

And who wouldn't love knowing that they work with a sketchy dishonest silver fucking Pathfinder driver?

Ok. So maybe I'm not 100% sure it was a Pathfinder.  But it was a big ass silver SUV, and I'm gonna be on the lookout for one with blue paint ground into its driver's side door.

You're really lucky that you hit a crappy '04, paid off Corolla.  I sorta think the dent adds character.  And I wouldn't care about fixing it if the car wasn't going to be covered in snow and salt soon.  That shit will turn that dent into a fucking rust hole by March.

You're also lucky that I have a kick ass insurance company who sent out a friendly claims adjuster to assess the damage.

Chick with the curly black hair, gorgeous blue eyes, and great sense of humor was a pleasure to spend a half hour with.

She even went along with my claim that whoever hit my car also went and plastered a bunch of stupid Dora, Diego, Superman etc... stickers onto the rear windows. 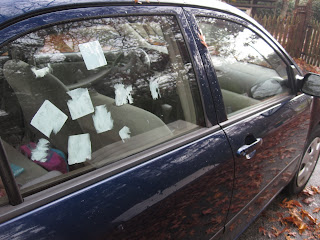 Sometimes I'm sure it is a shame that I don't go that way, as I'm fairly certain she does, 'cause girlfriend was smart and funny and just beautiful.﻿
Ah well.  Maybe in my next life.
Thank You Kris At Pretty All True;
So.  Really.  Thanks.  Was quite the pleasant surprise to find myself featured on your blog.
I especially loved the way you balanced saying nice things about me with making me seem like a total jerk.  That is my favorite.  I'm not kidding.
Made my fucking week.
Also thanks to The Empress who had a hand in getting Kris to feature me.  You're too nice.  Seriously.  Too nice.  I am waiting for a profanity laden pissed off rant from you.  Come on.  You wanna do it here?  The floor is yours.  Would be fucking awesome.
And last but by no means least:
Thank You Sprite's Keeper;
I know I haven't been the most consistent Spin Cycle participant, but I've written some of my favorite posts based on your prompts, and have met a bunch of great bloggers because of you.
I don't blame you one bit for letting go of the weekly responsibility.  I know I couldn't do it.
I am happy to take part in the final Spin Cycle and look forward to more tales of life with adorable Sprite.

Please tell me you're only giving up the Spin Cycle and not the blog.  Please? 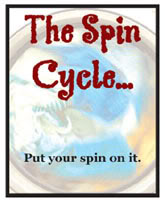