I have heard it every March 31st since Owen was born.

And every March 31st, I have disagreed.

I refuse to burden the day that Owen entered the world with the title, even in part, the worst.

No. It was not what I had expected. Nor was it easy.

I do admit, that once a year, I allow myself  to go back to that day, back to all the moments that made up that terrifical day.  I think I remember them all.

And with ten years distance from that morning, I am able to look at the events with a fair amount of emotional detachment, as if they happened to some other poor girl, long ago, in a land far far away.

When I do try, when I sift through all the difficult moments of that difficult day for a possible worst? A surprising one rises to the surface;

Al and I have left Owen in the hands of the med flight crew, the nurse having told me his slim chances of making it to Boston.

We are in the parking garage, walking up the ramp toward our car.

I'd given birth less than twelve hours before. I knew I should, but was unable to feel physical pain.

Empty I was. Body. Arms. Mind.

We got into our car and I turned to look at Owen's would be car seat.

But that moment? That may have been the worst? Was only a wee speck of time.

Because only a few hours after that moment came the best thing I'd ever heard in my life; a surgeon's voice on the telephone telling me that Owen was alive.

Followed in a few hours by another best moment; seeing Owen alive.

And then there were many best days;

All the days that he was supposed to die and didn't.

And the bests kept on coming.

I may have waited longer than most for his firsts. That only made them better.

Few of the days have been easy, but that does not make them bad.

And not one of them has been the worst.

Now that I think about it?

I've not yet had a worst day.

And all my bests? Are probably better than yours. 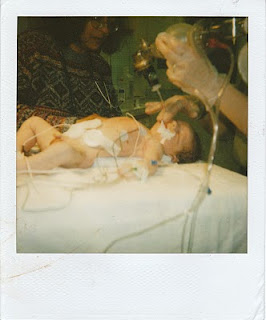 Email ThisBlogThis!Share to TwitterShare to FacebookShare to Pinterest
Labels: My bests are better than yours.