On Kindergarten, Hangovers, And Hope.

A kindergarten classroom would be my last choice in which to spend a hung over morning. But at Bea's open house last month, there was desperate pleading for any parent with the desire and the time, to please volunteer in the class.

Other people's kids don't thrill me a bunch, I much prefer the over 80 crowd. And I can't say I wanted to give up one kid free weekday morning per week, but not wanting to seemed a poor excuse to not actually do it.

So I do. Wednesday mornings. Though yesterday, my post-election fog almost had me bailing, sending Bea to school with a note to her teacher claiming *sickness*.

Despite the headache and fogginess, I was feeling oddly energized and positive, given what had kept me up so late.

Tuesday had started out with yet another discussion with Bea and Owen of all things election;

Who is the President?

What is his job?

Who is the other guy?

No, they aren't actually going to be running alongside each other.

Who should we vote for Mommy?

And many more questions over breakfast as we prepared to head to the high school down the street to vote. Trying to keep it simple for the five-year old, and utilizing newly obtained signs for the Deaf nine-year old.

Owen made me stop in the driveway as we were about to leave, ran into the house to fetch his encyclopedia of past presidents.

Bea became silent and appeared terrified as we made our way across the parking lot into the school;

"I'm scared. I don't want to talk to the President." So damn cute.

"Oh, I would LOVE to talk to him, but sadly he's not going to be here today."

They hovered over me while I took the sharpie to the ballot and filled in my ovals.

Then it was their turn.

How cool is my state? 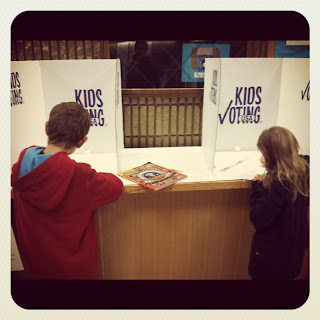 The rest of our day was spent exercising our rights to get hair cuts, to eat great southwestern food, and to attend karate class.

The second the kids were tucked in, I assumed the position in the big living room chair, wielding remote control and iPhone, cross stitch project on lap, wine glass filled to brim, and election coverage on the TV.

I rather enjoyed the bumpy ride. Just ask the mostly empty wine bottle. The big one.

And then, just after 11pm, feeling more of a fun mix of relief and disbelief than of victory. And quite possibly a goofy grin.

Before I know it, I'm standing in a kindergarten classroom, cursing the flourescent light, wincing at the sound of the bell, wishing the little voices actually sounded little, as I perform my assigned tasks of cutting and folding and stapling.

Story time happens. Being the month of Thanksgiving, the focus is on family, and the book of the day visits all different kinds of families.

I find myself abandoning my cutting and turning my attention to the teacher as she reads. It went pretty much like this;

And because I'm a dork, when she got to the next part?

Some families have two Mommies, and some have two Daddies.

I teared the fuck right up.

I know that this is a very small part of what Tuesday's decision means.

But in that classroom, surrounded by those kids who get to grow up with that understanding of love, I felt so stupidly hopeful.

And if things had taken a different turn on Tuesday?

I'd have been crying for a different reason.
Posted by tulpen at 6:44 PM

Email ThisBlogThis!Share to TwitterShare to FacebookShare to Pinterest
Labels: I'm a dork, love