A Future So Bright

So.  Tuesday night at around 9:30 I called Bev's daughter, June.

I had a feeling it was time.

For two hours we sat on either side of Bev, June's husband Dave at the end of the bed.

What followed were the two most love filled hours I've ever witnessed.  The things June was telling her Mom were perfection, heartbreaking, bittersweet, hope filled.

I was honored and humbled and a bunch of other corny crap.

I'm not religious, but certainly spiritual, and whatever higher power is out there, it had us wrapped up, warm and tight in that room.

Bev passed 15 minutes after I left.

I'm pretty sure she was waiting to have June all to herself.

At some point during those two hours, a hot tranny mess (Hi Lynn!) of a hospice volunteer, showed up.

Seriously.  Through sobs, June and I tried not to burst out laughing.

We decided this is the person they send in to scare the stubborn ones into the great beyond.

Wednesday morning, as soon as Owen was on the bus,  Bea and I headed out for a play date with a girl from preschool.

I couldn't wait to check out the Turnip Farm.

Bea and Trudy played for almost three hours while Jane and I drank tea and chatted.

You know the first time you hang out with someone, you're not quite sure how much of yourself to reveal, you tiptoe around certain topics, it takes a conscious effort to avoid those awkward pauses in conversation?

There was none of that.  We told each other as much of our life's stories as time would allow.  Plenty in common. Personalities easily meshed. I could have stayed and talked all day.

Plans were made for trip to zoo as soon as it stops raining, like sometime next year.

And this morning?  She brought me a dozen eggs from her chickens!

After the play date, we picked up Owen for highly anticipated ear cleaning appointment;

Before I share those gory details, a little business to attend to.

I hate being late.  If I arrive for an appointment exactly on time, I consider that late, because in my crazy head, I need to be early for everything.

So when Owen's teacher didn't have him ready at the pre-arranged time, and then I hit traffic, and then I couldn't find your new location, my anxiety grew to such levels that I almost popped the Ativan that Owen was supposed to take to get him through the procedure.

At the exact time of the appointment, I called to let you know we were going to be late.

I just LOVE the 517 options I'm given to assist me in reaching the correct person.

And of course EVERY specialty except for Otolaryngology was an option.  So I was forced to hang up and call again.  While dealing with traffic and cranky children. And wait for the 'Make an appointment' option, which I chose, and waited.  And waited.

And pulled into the parking lot eight minutes late, still on hold.  And walked into the building.

And approached YOU; STILL. ON. HOLD.  And noticed that neither you nor your co-receptionist were on the phone.

And waggled my phone at you;

"I've got Owen Elefanten here for a his appointment, I tried to call and tell you we were going to be late, but I've been waiting on HOLD for five minutes."

And instead of the apology and thorough ass smooching that I clearly deserved you gave me;

"Oh. We'll see if the doctor will still take him."

Oh.  You done bitched up the wrong Mommy.

"Yeah. We're a whole ten minutes late. Which is less time than we're usually made to wait when we're on time, so I don't forsee a problem."

"Hmph. *shoves pile of paperwork at me* You need to fill all this out and I'll see if the doctor will see him."

Sign few forms and just to be a jerk, tell asshat that I haven't filled out Owen's medical history. 'Cause that would take fucking hours.

"Well. Everything that has ever been done to him is in your system. I'm pretty sure Dr. W knows how to acess his records."

We do get to see the doctor. But after Owen's weight is obtained, which makes no sense as they don't weigh him after the wax is removed, and sometimes I think there would be a considerable difference.

His oxygen saturation is also measured.  And I laugh at the number; 100%.

"His lungs were smashed to smithereens when he was a baby.  He shouldn't be 100%."

Gobs and gobs of crap are removed from his ears without injury to myself or doctor.  Or Owen.

Owen high fives everyone in office and declares;

"I hear better now!  We go to McDonalds?"

Which makes my fucking day. 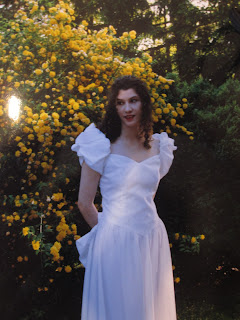 Caps and gowns not virginal enough for the all girl's Catholic school.  Wasn't I pretty? 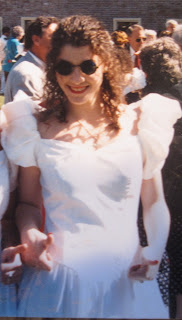 And I was as cool as one could be in that poofy thing.

I have no idea what I expected out of life on that day.

A husband and kids, good friends, maybe a job I didn't hate.  Yeah, that was the extent of my ambition.

And not boring.  Yes.  I wanted something out of the ordinary.

I babysit for friend Sally two nights a week.  Her husband leaves for work around 10pm and she gets home around 11:30.

So I show up in my jammies, book in hand, ready to crash on their couch.

So it would seem.

Email ThisBlogThis!Share to TwitterShare to FacebookShare to Pinterest
Labels: how cute was i twenty years ago?