The One With The Witch's Window

Joining the memoir meme again at The Red Dress Club.

Think of a room from your past. It can be any type of room at all.

Take a mental picture of that room.

What happened there? What is it like? What is the atmosphere there? What are the smells, the sounds, the sights? How does it feel?

Now reveal that snapshot to your reader.

Take us to that room.

Knowing which room was easy.  Sticking to the 750 word limit?  Just don't count them and we'll call it good ok?

The window was the first thing I loved about the celery green farmhouse.  I loved it more when I learned it was called a Witch's Window.   Nestled in a corner, overlooking the tin porch roof,  peeking sneakily down the road.

Whether you entered the house through the front door off the porch, or the back door through the carport, you'd land in the kitchen.  A half wall separated the kitchen from the dining room, which was never used for dining.

A flimsy plywood door off the dining room opened to reveal the most amazingly wonky set of stairs.  Three imossibly shallow steps, and a sharp turn to the left took one on a stair climbing adventure requiring feats of balance and stealth.  Each step being at a startlingly different angle from the last, and from the next.  The passage so narrow that the walls served many a climber as means of support.

At the top of the stair, a hard left brought one facing the doorway to the room with that window.  Right angles and level surfaces being scarce in the hundred year old farmhouse, the door never closed properly.  Directly to the right of the doorway, a closet,  missing a would be ill fitting door.

The wide pine floor boards were partly covered by a deep red carpet. A remnant from the back room of the mom and pop rug shop in town.

Opposite the doorway, the ceiling was at a steep slant from knee high up,  papered with a delicate flower pattern.

Tucked under the slant, a crib.  Handed down from my sister,  pale wood and plain design. A light green sheet hugged the mattress. A quilted ABC bumper cushioned the slats.  A few blankets folded at one end.  A stuffed animal or two sat waiting.

There was no need for a mobile hanging above.  An ABC patchwork quilt, matching the bumper, hung on the slope, where it could easily be seen by a little one looking up.

In front of the crib, a large cradle, made by my grandfather.  One of the last things he'd made before his mind stopped letting him create.  Darker wood than the crib, it looked older than it was, had no decoration save a heart carved at the head.  It was overflowing with blankets, mostly knit by families of my patients at the nursing home.

At the foot of the crib, sharing the nook under the steep pitch of the ceiling, a small bureau, painted white. An empty picture frame, waiting to be filled with chubby cheeks, sat on top.  The drawers were organized by item and size.  Sixty three onesies, I'll always remember that number, sixty three, folded in perfect squares, in perfect rows; white, green, yellow.

The other two drawers were filled with more green and yellow, as nobody but myself knew the secret that I held in my belly; that this baby would be a boy.  I'd told no one.  Not even Al.  And no one, not myself nor Al, could have imagined the secret that the boy held.

Above the dresser, on the wall to its left; the window.  Its angle mimicking the lean of the ceiling.  I'd fashioned a curtain out of a scrap of fabric plucked from a yard sale.  It didn't cover it, and bits of light peered out from the winking eye.

Sharing the wall with the window, a small shelf, home to a few elephant figurines; charms for luck.

To the left of the doorway, the changing table.  A matched set to the crib.  A green terry cover over the concave mattress.  Two shelves underneath with baskets full of square towels, plain white burp cloths.

I'd insisted I would need one, and the brand new glider rocker sat in front of  the closet. Off white cushions on chair and gliding footrest. I'd often sit and and rock my belly, allowing my mind to fast forward to rocking its inhabitant.

The window did not let in much light, and the small lamp on the dresser lessened the dimness only slightly.

A dark womb with only a soft glow sitting in its corner.

I cannot regret asking Al to shut the nursery door before I went up to pack for the trip to Boston.

Nor can I regret not asking my friend to take a picture of the room before she dismantled it, sparing Al the task.

It is ok, that the only picture I have of that room lives in my mind.

It truly is ok, that the only evidence I can show of that room, is the window that drew me to the old house in the first place. 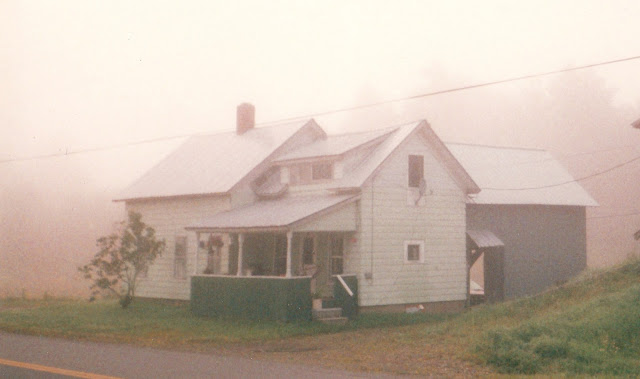