I did mean things like throw her stupid My Little Ponies in the garbage when it was my Saturday chore to empty the wastebaskets from the bedrooms.

I eventually told her that I'd done it.  We're all grown up now and she forgives me.  Sort of.

She got Bea a My Little Pony for her birthday.  We both thought it was hysterical.

She stumbled downstairs this morning to "Happy Birthday!" greetings from Al and myself.

Owen, still peeved that she stole his thunder four years ago, when he was almost four, shouted at us all;

"No!  Her birthday on nineteen! (pointing at calendar).  Not! Today!  Nineteen!"

Explanations that yes, her party was then, but her actual birthday today, were met with grumbles and foot stomps.  Quick to diffuse smoldering sibling hatred resentment tension, I reminded Owen that today we would be going to the Children's museum with Deaf friend Ricky and long time friend Lil.

We were on the road early, but not before I could snap a quick photo of birthday girl in outfit of her choosing: 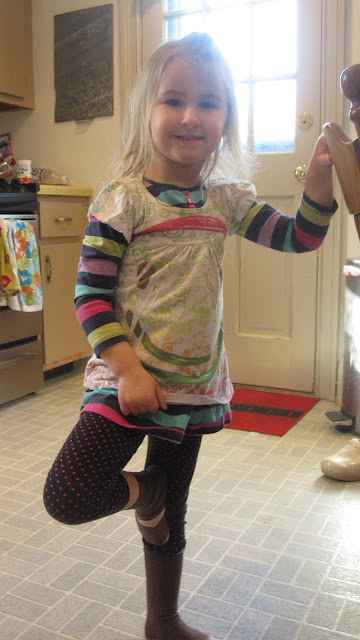 Sweet fancy Moses get a load of this chick; doing the Tree Pose no less.
﻿
Kids were mostly jerks just fine at museum. The only Another couple good shots: 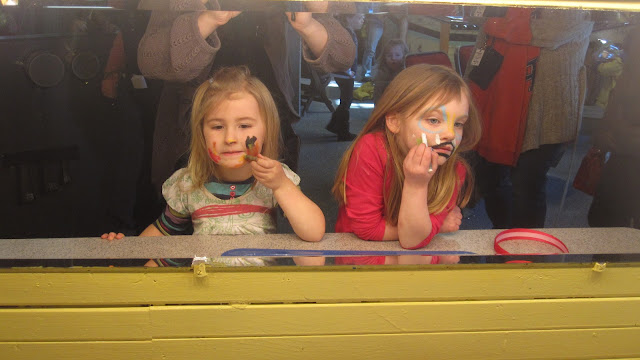 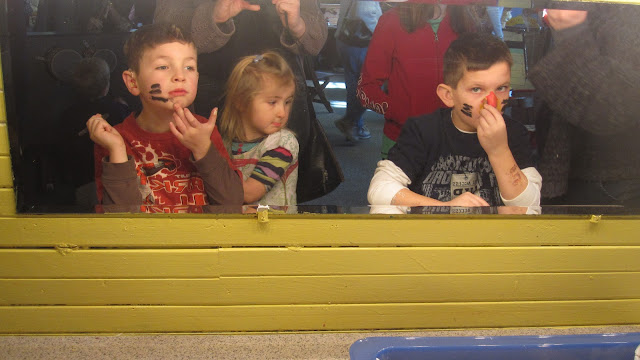 ﻿
They were almost passed out by the time we got home.
Just in time for the real birthday thunder pilfering to begin.
Owen. Got. A. Fucking. Video. Phone.
Al was right on time. I'd assumed he was Deaf from his emails, something about the way he structures his sentences, I could tell.  And as he was coming up the walk toward the door where I was waiting, he gave me a wave that let me know for sure.  Deaf.
So I greeted him in sign, introduced Owen, Bea, friends Jen and Lil who were hanging out for afternoon.  Told him it was Bea's birthday.  Sort of signed frantically for a minute or two before he could get a chance to speak.
Yes.  Speak.  Not great.  But enough that I didn't have to rely on understanding his signing.
Whew.
I signed to him.  He spoke to me.  Perfect.
The process of getting the video phone set up did involve Al and I dragging an old TV up from the basement and setting it up in the playroom, as he said it was nice to have a TV devoted to the phone so as not to interrupt TV viewing.
We chatted while he plugged in wires and tested internet connections:
"You're wondering why I speak so well right?  I am completely Deaf you know."
Born Deaf in Ohio (in the late 50's I'd guess), he'd gone to an all Oral school until he was in Jr. High when he started to learn sign.  So he'd had intensive speech therapy;  it worked.  For never hearing a sound in his life, I understood his speech just fine.  He'd never learned to read lips very well though, and relied solely on sign for comprehension.
He asked about Owen.  I gave him the quick explanation:
"Born sick.  Antibiotics.  A lot.  Hearing gone."
He asked if it was known that antibiotics would have this effect on his hearing. I told him yes they knew but;
"Dead or Deaf.  Pick one.  Deaf better."
He laughed and agreed.
Fiddling, tinkering, chatting, and video phone was ready to go.  Owen's only friend from school who already has one is a four year old girl Riley.  They were ready for our call to test it. I'm a dumbass and thought I was filming that interaction, but wasn't.  It was cute anyway.
Here is a quick picture that I managed before I blew it with the Flip: 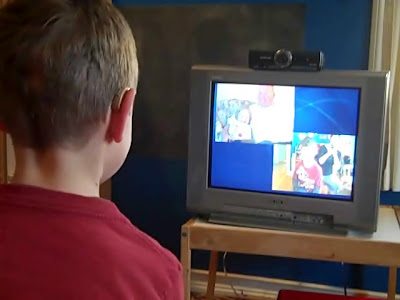 And here, if you can stand the cuteness, is Owen and Al talking to a tech, getting the account set up.  I'd never seen Owen sign his address before.  I almost fucking cried.
eta: the video isn't broken, there is nothing to hear, they're all signing.
And?  A little thunder rolled my way when tech told Owen how lucky he is that his Mommy signs, as I had to give him some information.  Tech was of course Deaf, and of course adorable.
He can't wait to talk to his friends with it.  Daddy called, and using the interpreter was able to talk to him; he was tickled but really wanted to talk to Ricky, and Nolan, and Trinity.
Owen cried the other night when Trinity called him, he wouldn't even take the phone from me;
"I can't hear her!"
I called and left a message with her parents that they NEED to get her one of these phones.
They're free ya know.  Well not really.  You all pay for them.  Look on your phone bill.  Thanks by the way.
Bea was curious about the whole thing, prancing around in front of the TV, watching herself on the screen.  Owen was all business;
"Is for me Bea.  For Deaf.  Why?  I can't hear my friends on the phone.  Is mine.  Not yours."
Sorry Bea.  Sucks to be the normal kid with no cool gadgets eh?
And?  Muffy's birthday is in March.
I'm totally getting her a  My Little Pony for her 34th.
Posted by tulpen at 9:54 PM