Not One To Which You Wear A Fancy Dress

For once, I double booked appointments in my favor.  Before Owen's hospital visit on Monday, we swung by the Ophthalmologist for a quickie eye exam.

In true anxious Owen fashion, he'd peppered us with questions about the eye exam incessantly all weekend;

"Just look at my eyes right?"

"Just talk to the doctor right?"

I can only take so much.  Which is less than the 489 times he asked me;

"Well.  Actually.  They're going to need to take your eyeballs out, squeeze all the juice out, put new juice in, then put them back in your head."

A stricken look on his face for a millisecond before I assured him that I was teasing, and he better not ask me again.

He didn't ask me again.

He was relaxed as he sat on my lap while the tech got ready to test his vision.  She asked him if he was ready to start;

"You gonna take my eyeballs out now?"

After that long day of appointments, I got home, poured a glass of wine and opened my mail, the paper kind.

Thank you so very much for the postcard  Nubian. 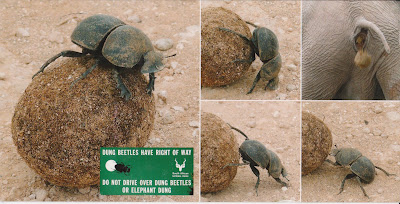 This made me feel so special.

Who on earth would appreciate pictures of big balls of elephant shit?

In Owen's seven years of wearing hearing aids, he has subjected the costly little gadgets to all manner of abuses.

As a toddler he'd rip them out of his head and throw them across the room, several times a day.

As he got older, his aim got better and he'd throw them at my head, several times a day.

As his fine motor skills improved, he'd take them out, dismember them, and throw all the pieces at my head, several times a day.

Thank goodness, he's old enough now that he treats them with the respect they deserve.  He is totally self sufficient in their care, save for changing the batteries.  He removes them carefully before bed, pops open the battery doors, and places them lovingly in their little container on his bureau.

Last night, just before he stepped into the bathtub, I was standing in front of him, hand outstretched waiting to receive the aids and place them safely out of the splash zone.

He took them out, bent his knees in a deep squat, rubbed his hearing aids on his balls, and placed them in my hand.

My facial muscles contorted in a battle between stern disapproval and emerging giggles.

I made it to the kitchen, safely out of Deaf earshot before howls of laughter took over.

Minutes after bathtime was finished, and hearing aids given a gentle swab with an alcohol pad, my cell phone rang.

Owen's friend from school, fellow Deaf kid Nolan, was on the phone.

I'm quick with the Flip, and caught Owen's very firstest phone call from a school friend on video:

If they could have actually heard each other, I wonder if they'd have compared augmentive hearing device ball rubbing technique.

I also wonder if Nolan was on the other end signing like Owen was.

So you liked my signing?

Thanks to any of you who commented on my cuteness or hotness even.  You're hysterical.

You know who I think is hot?

Also?  She kicks my signing ass all over the place.

I just might have the balls to try it.
Posted by tulpen at 6:47 AM

Email ThisBlogThis!Share to TwitterShare to FacebookShare to Pinterest
Labels: I Said Balls