Owen went back to school today.

I remember the day I learned about Owen's hearing loss.  As soon as I got home from the hospital (after stopping at Border's and grabbing a Sign Language Dictionary), I called the director of his current school.

Lynn was at my house within the week.  She was instantly smitten with a beautiful Deaf baby.

I was instantly smitten with her.

She came to our house every week to hang out with Owen.  To introduce him to ASL.  To work on his speech. 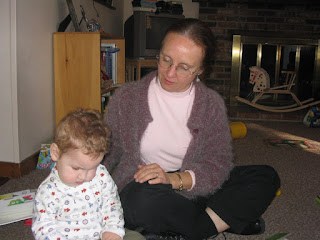 She came to us once a week, and we went to the school once a week for playgroup.  Until he turned three and started pre-school.
He's been at the same school since.
*******
I was more than a little anxious about this coming year, as his school has moved.  But all of his teachers, aides, therapists, and classmates have moved too.

At the orientation last week, Lynn was uncomfortably on the defensive, knowing that some of us parents were none too happy about the move.  She made an exhausting effort to explain the move in the most positive light.

I was proud of the none too happy parents.  Not a negative word passed my ears.  We all gushed about the school, which is newer and better equipped than the old one.  We declared our love for the bigger classrooms and the sweet computer lab.

She pulled me aside to further explain. I felt sorry for her position of needing a public school system to house her most prized pupils.  The old school was pushing her out. She needed to act fast to snag some space.

Even though the way was so much further from home.

So Owen got on that bus this morning, eager to see his friends and teachers, waving me off as I hugged and kissed:

Much different from his first bus ride three years ago:

That video reminds me of a nervous habit that Owen used to have.  Playing with his g-tube.

This is the first first day of school that I've sent him off without his tube.

Poor Bea.  She wanted to get on that bus with her brother so badly.  Since she couldn't, she sent her friend along with him.

Jack has been with Bea for the past year or so.  Jack is Bea's best friend and playmate.He and Bea color, play blocks, hide and seek, he pushes her on the swing, requires lunch, hits, and earns time outs.

He is with us most days.  Except for today.

Bea:  "I am going to school with Owen tomorrow ok?"

Me:  "No Sweetie, you can't go to school with Owen.  Owen goes to a Deaf school. You are Hearing, not Deaf."

Me:  "That's nice,  Owen will have another friend at school."

So.  I was so nerved up about Owen's first day at a "new" school, that I tried like Hell to get someone to cover my shift tonight.

I really wanted to be home when he got off the bus.

Al didn't get it;

"He'll be fine, he's been going to school for years. What are you so worried about?  He'll be FINE."

"This has nothing to do with Owen.  I'm freaking the fuck out here.  I need to be here when he gets home."

I couldn't get anyone to take my shift.

I called in sick to work.

Of course, Owen was fine.

More random at UnMom.
Posted by tulpen at 9:19 PM

Email ThisBlogThis!Share to TwitterShare to FacebookShare to Pinterest
Labels: Random Shit, So Not That Random At All.... Whatever...