With Me, But Not Belonging To Me.

Today was the semi annual ECMO reunion at Children's Hospital. Also the 25th anniversary of the ECMO program.

I'd gotten the invitation a couple months ago, and was given the day off by my director of nurses whose daughter works with ECMO patients at Mass General. She knows what a big deal it is, and didn't hesitate to grant me the day.

We've only been to one before, when I was pregnant with Bea. They throw quite a party for these children who shouldn't be. Arts & crafts, face painting, wild animals, live band, tons of food.

Poor Owen didn't understand then, what all the fuss was about. Who all these people were who certainly remembered him as the kid who was on ECMO twice. One round of ECMO is an extreme feat of survival, hence the big party. But TWICE? Such a rarity.

The garden courtyard is a lovely venue. I'd spent countless hours there when Owen was inpatient. His first trip outdoors was almost exactly 7 years ago, in that very garden. 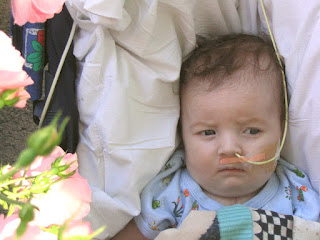 I wanted to go. Knowing that I'd be a smooshy weepy mess the whole day. Large sunglasses that cover half my face had been purchased just for the event.

I wanted to sit and cry and squish my warrior.

Owen was up at 4:45 this morning, sitting at the kitchen table writing about Spiderman.

Signing as he wasn't wearing his hearing aids.

"Today party at hospital. For kids like you. Sick babies like you. Party outside in garden. You understand?"

I convinced him to go back to bed, and he did, and he slept.

He woke up around 7am.

"I not want to go hospital. It too far. Want to stay home."

"Ok. Want beach? Playground? Anything you want, we do."

I felt bad about skipping the reunion. I wanted to mark the occasion. To honor his accomplishment, his survival. To thank once again all those who had a hand in giving me this unique kid, this unique experience.

As the past seven years have whizzed on by, those weeks and months when our lives dangled precariously are getting buried. And I don't want that.

You'd think it would be painful to revisit that time, maybe it is a little, but it is a good pain.

Reliving life in the ICU, when we didn't know hour to hour how long we had with Owen. The day to day caring for a critically ill newborn; appreciating that no news is indeed good news.

Trusting my heart to strangers who knew better how to keep it beating than I did.

The realization that this person is not mine alone, but belonging to something much greater.

These feelings, I strive to preserve. To hold close to the surface. To remind me, center me.

But. That stuff is about me. Not him. And he didn't want to go. So we didn't.

We lounged on the couch watching cartoons. We fetched Bea when I heard her squeal.

He ate a bologna and cheese sandwich for breakfast. And a grilled cheese for lunch. Freeze pops are a new favorite.

He and Bea played in the pool, bikes, scooters, squirt guns, follow the leader, hide and seek, Spiderman, swings. 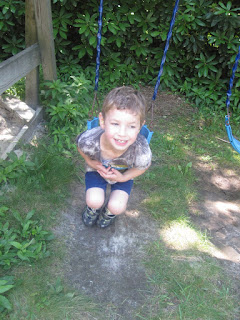 A fantastic day. Better than most.

Better than anything I could have imagined back in those days when ECMO was busy making it all possible.
Posted by tulpen at 7:28 PM

Email ThisBlogThis!Share to TwitterShare to FacebookShare to Pinterest
Labels: Sigh