With a Jug of Wine in One Hand and A Toilet Brush in the Other.

Owen's school had their end of the year party on Friday.

He asked me to bring his camera. 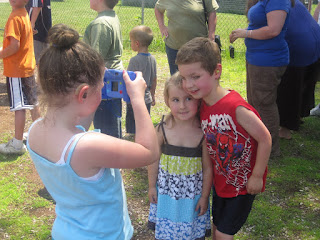 One of Owen's best friends taking a picture. How freaking cute.

None of those fat people behind the kids is me.

I need to get on the ball and get more posts from the old blog over here.


So, I really wanted an excuse to have one of those big bouncy houses in my yard for a day. I found a rental company and reserved the biggest one. With a giant slide on the side.

I fired off an invitation to Owen's school friends, family, and other misc friends. I figured we'd get a dozen people or so.

That's how many people are going to be in my yard this Saturday.

Most are bringing food. And chairs. And wine.

I'm spending most of this week preparing yard and house for onslaught.

I'm scrubbing every inch of my house. For an outside party.

Bea has been introduced to nail polish by one of her aunties.

We went and bought her her very own polish. Pink for her and she insisted we get blue for Owen.

We now paint her nails almost daily, and for the first time ever, I have painted toenails. I love them.

Part of her manicure the other day involved clipping some rather gnarly nails. She HAD to do it herself.

"See! I can do the clitters myself! See? Clit Clit Clit!!"

My little corner of the planet happens to sit on the corner of a large development and a road that takes summer fun seekers to ponds and campgrounds and such.

My little driveway is the obvious choice to turn around if a neighborhood dweller gets to the end of the road and realizes they've forgotten something important.

My little driveway is also the obvious choice for summer fun seekers to turn around once they realize they've taken the wrong left hand turn.

If you happened down a stranger's driveway while a person was standing in it with said inhabitants, and owner of driveway asked you nicely to please NOT turn around in her driveway;

Would you argue with her?

Would you continue to argue for FIVE minutes that it is not 'out of the ordinary' to turn around in some one's driveway, while woman stands there pointing to said dog, nugget, and Deaf one?

Would the fact that woman was wielding 24oz wine glass and signing frantically hurt her argument?

We considered placing a spike strip at the end of the driveway.

But settled on parking at the very tippy end of drive, an inch from the road, thus foiling all attempts at turnaroundage.

I very much enjoy watching cars slam on brakes as they fear a car is pulling out of the driveway.

I'm going to Town Hall and requesting a DEAF CHILD sign be posted on my road.