With Better Use Of My Oral Skills #SNRyan

Even with his hearing aids, Owen misses most conversations that occur around him.

Chatting at the dinner table?  He tunes out until he picks up an interesting snippet and then demands to be filled in on what he'd missed.  Which I then give to him in a mish mash of words and sign in fucked up semi ASL syntax.

Talk in the car?  We're not allowed to speak in the car, 'cause he can't hear us. We all just put up with the music played LOUDLY enough for him to hear it.  Thank goodness he has good taste.  His current favorite is Adele.

Sitting around the living room?  The TV is LOUD, and he's struggling to listen while reading the captions.  If anyone dares speak, he tells them to stop.  Or if he is curious, will turn the TV off and wait to be caught up on what he missed.

It can be exhausting keeping him in the loop.

And also?  His English SUCKS.

Without the luxury of listening in on everyday conversations around him, he's not learned enough English. He speaks in a funky English/ASL hodgepodge which his speech therapist brought to me as a serious concern.

What could possibly give him more access to spoken language?

To the tune of thousands of dollars.  Which I don't have.

So I started making calls to get help paying for it.

And before I was forced to use my other mad oral skills, the unthinkable happened; A mysterious benefactor offered to purchase the system.

Owen's hearing aid provider was shocked and elated for us.  And a little freaked out as Owen is a special case for her.  She doesn't treat children. Only old people. She took Owen on as a favor to his audiologist.

She took her time learning about different systems.  Attended a hearing aid convention and met with Phonak.

And yesterday we got it.

Apologies for lack of video evidence, but the look on Owen's face when Dr. Julie put on the transmitter, left the room and spoke to Owen?

He turned bright red and his face split into a painfully huge smile.

Continued goofy grinning as we drove home listening to his girl sing to him like he'd never heard before.

This morning he asked Bea to wear it.  We figured out how to attach it to the iPod, and his DS, and the TV.

He asked if the dog could wear it.

Talking to Bea in the kitchen this morning, Owen came running in from the playroom asking when we were going to the playground.  'Cause he'd heard us.

So from now on, I'm going to look like this: 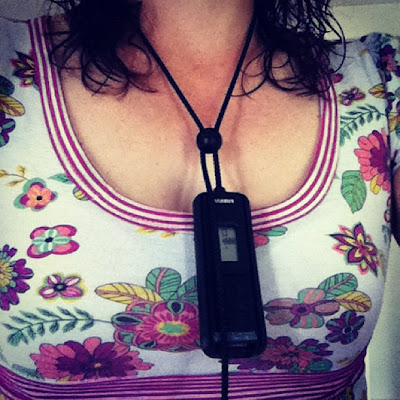 Well Ryan thinks it is: 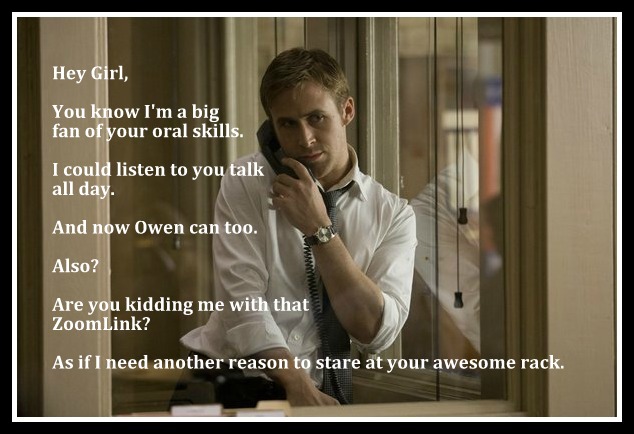 Joining Sunday and the gang once again!!!  Go see what else our boyfriend is up to.