The only gift I've ever given Uncle Rusty is a fake check for a million dollars.  If it was real money, it wouldn't be nearly enough.

When Owen was three months old, Rusty gave me an unexpected gift.  Owen's first feeding tube.  After the surgery, a grinning Rusty told me he had a surprise for me.  It was a Mic-Key Button, not the long tube he told us he always puts in first.  We were an exception to his rule.

And after a few months, I brought Owen in to have the tube changed; the nurse had us wait for Rusty.  He always watches the Mom change the first tube.

He thrust the box into my hands and told me to go home and do it myself.  I may have shot the nurse a dirty smug glare.

I talked to Rusty weekly during Owen's first winter.  An all too common side effect of the fundoplication surgery was making itself known.  Like twenty times a day.

Nothing we could do but remove the air and formula with a 60cc syringe, watch helplessly, and wait for the episode to pass.


Like twenty times a day.  Too many of those times?  Owen would turn blue.

I'd cringe as I fulshed the formula down the toilet, as it was the only nourishment Owen was getting.

Weekly treks to Children's for tests to monitor condition of stomach, to ensure the fundoplication was still intact.  Everything always checked out fine. And despite all the formula we took out of his stomach, he was maintaining, even gaining weight.  I resigned myself to the fact that the retching would be a permanent part of our lives.

Rusty's nurse called me to give me his cell phone number.  He never gives it to Mommies she told me.

I never used it.

The retching would get better for a few months, then return for a few.  If he got an actual stomach bug?  We'd end up spending a couple nights in the hospital for IV hydration.

He eventually outgrew the retching when he was around 5.  Which was around the time he started actually eating.

And the g-tube?  Came out for good on his 7th birthday.

Ignore me calling him by the wrong name, I was drunk.
I didn't worry that he'd eat enough to sustain himself.  I worried about his first stomach bug, with no way to empty his stomach for him. Knowing this inevitability, I was sad to see the tube go.

The week before Christmas, at work on Monday night, a text from Al.  Owen won't stop retching.

Tuesday.  Retching all day.  Even after sips of water.  Explosive diarrhea.  Owen reduced to the consistency of a limp noodle.

Wednesday.  Still retching, but drinking water.  Every time he went pee, I'd eagerly wait to see the color of it.  Too concentrated?  We're going to the hospital.  Checking his lips, his tongue, his skin turgor, waiting for the first signs of dehydration that would send us packing for some IV fluids.

Thursday.  Juice!  Progress.  But no food.  He admitted not feeling sick anymore.  He was scared.  I didn't blame him.

Friday.  Christmas Eve. A bite of a bagel, choking it down with a grimace and slamming it on the table.  Mad at food he was.  I didn't blame him.

I threatened him with the hospital.  With a tube up his nose and into his stomach if he didn't eat.  Is exactly what would happen.

Moping around as our house filled with family, as we hosted the big Christmas Eve celebration.  A bite here.  Nibble there.  Still weak and taking frequent rests in his bed.

You eat tomorrow.  No hospital ok?

Holding out mini bagel with butter, salt and pepper, per his request.

We'll see Uncle Rusty again in a couple weeks, for our yearly check in.  Owen will proudly display the scar where his tube used to be. He'll brag about how much he eats, and that his stomach got sick and he didn't eat. And that it got better, and he ate again.

And I'm pretty sure Rusty will consider that a gift. 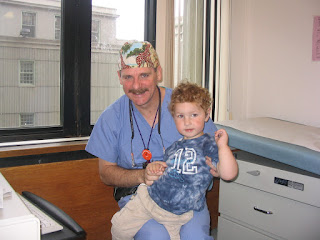