Bea loves bugs. Caterpillars and "itching worms" are her favorite. 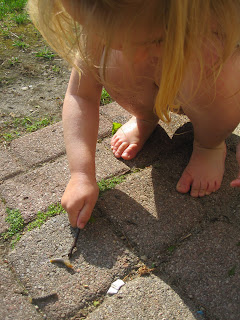 She also likes slugs. They're fun to poke with a stick and they leave a really neato slime trail behind them.

Few of these creatures survive her curiosity.

Friend DarcC is Momma to a couple ponies and a horse that she boards only a short drive away. One of her ponies had a baby and DarcC was kind enough to invite the kids down for a visit and possibly name the wee beast. 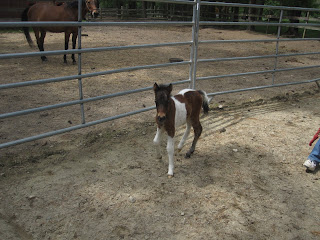 The thing was so dang cute.

Cuteness only rivaled by Bea and Owen.

The horse, Tag, so sweet, and blind.

Owen, feeling slightly freaked out, sought comfort in comforting Bea, who was far less freaked out. 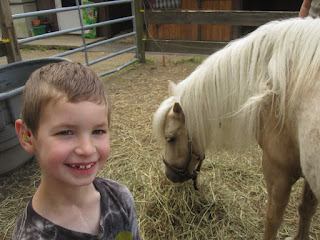 This smile says it all DarcC.

Thanks for an awesome morning. They'd love to do it again.

Oh, and the pony's name?

While checking out horsies and ponies, I swatted a gigantic mosquito off of Owen's forehead.

He woke up this morning with a large welt over his left eye and the eye pretty swollen.

I e-mailed his teacher to let her know it what happened.

well he has a different story for me, he said it was 'cause he and a friend were fooling around.

oh my he's too funny

on another note, he was incredibly sweet today, so sweet he almost had me in tears, it seems a friend was crying and wanted daddy to come get him, so owen decides hes gonna help this friend, so owen goes and takes him by the hand, brings him to the board and shows him the schedule and says see thats all you have to do then daddy will be here, ok....ohhh it was precious!

thanks for letting me know about his eye! 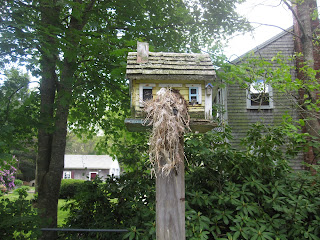 Olive munched some before I had a chance to clean them up.

Fingers crossed that those diseases transfer to canines.

And that they're fatal.

A friend at work had a dog she hated when her children were little.

One day while the kids were at school, she threw the dog in the car, drove a few towns away, and dropped it off.

When the kids got home she was beside herself with worry that the dog had run away; loaded everyone in the car and hit the road in search of their beloved family pet.

More random and fewer dead animals at UnMom
Posted by tulpen at 8:00 AM