Congenital Diaphragmatic Hernia Clinic at Children's Hospital Boston was the first of its kind in the country.  Not that many hospitals concern themselves with leading the way in treating a condition that affects one in roughly 2500 births.  With roughly 50%  of those born never having a chance at survival.

I've always loved clinic.  Even in the beginning.  Dragging Owen and all his paraphernalia into the city every couple months as an infant. Twice a year throughout toddler hood. Yearly as a young child.

I'd look forward to presenting him to the Big Brains On Sticks:

Dr. Breatheright; Pulmonologist.  Greeting us with that day's chest x-ray in hand; throwing it up on the lighted doohickey on the wall.  Pointing out the little blebs of damage still evident.  But marvelling at the fact that he'd never been admitted to the hospital for a pneumonia, hadn't taken an antibiotic let alone a nebulizer treatment since his initial discharge.

Amazing for a set of lungs once compared to Swiss cheese.

Dr. Calories; Nutritionist.  Coming at us armed with Owen's latest height and weight and current caloric and hydration needs.  Adjusting his tube feeds accordingly.  Asking about oral feeding, but without concern so long as he was growing and gaining; which he always did.

The calories feeding his body and brain being very important. How they got there?  Not so much.

Uncle Rusty; Fetal Surgeon/CDH Guru/Miracle Wrangler/Regular Guy.  Always with a fresh green resident in tow.  The resident eager to meet the kid who on paper looks like a train derailed. Off a cliff. On fire.

"He looks great.  Keep doing what you're doing."

Dr. ShouldBe; Developmental Specialist.  Armed with microscope in one hand and Normal Child in the other.

I knew the drill, and before she could tell me what to do, would grab Owen and assume the position under that microscope.

She'd go down her little list, using Normal Child as measuring stick, pointing out what Owen SHOULD be doing, but COULD NOT.

Five months old;  He should have better head control.  And his muscle tone?  Poor.

Eight months; Still not sitting up on his own?  That is a problem.

Year old;  Not crawling yet? That could mean trouble for his hips.

Eighteen months; He should be able to hold a crayon.  He can't stack these blocks yet?  How many words does he have?  Oh.  He's not walking?  Hmmmmmmmmm....

He should be able to hold a spoon.  Feed himself.  Sort shapes. Drink from a sippy cut.  Run. Jump. Hop. Skip. Speak.

My ass.  He should be dead.  I wanted to remind her.

How dare she?  Compare him to a Normal Child.  Had she not seen his chart?  Did she never realize that she was in the presence of a medical fucking miracle?

How was pointing out all the things he couldn't do going to help us?  I was aware. Of everything.  And not concerned.

That developmental milestone timeline went down with the train the minute he was born.    It was not something that was ever going to apply to Owen.

And I never cared.

So. When Owen was five years old, I made his clinic appointment and kindly asked to NOT see Dr. ShouldBe.  That felt fantastic.

What mattered, what matters, is that this baby; 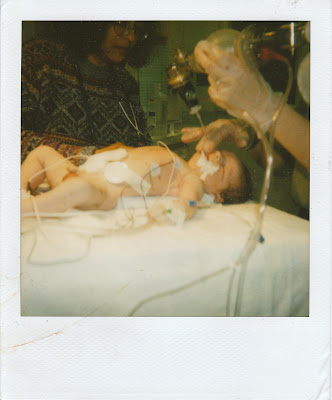 Runs and jumps and sings and dances (in princess dresses) and reads and writes and eats his veggies and is fluent in TWO languages.

It doesn't matter that it took eight years to get here.

And Dr. Shouldbe may agree.

That baby up there?

Probably shouldn't be this kid today. 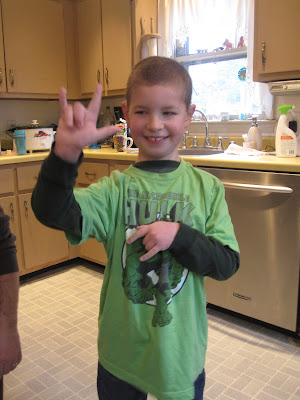 Happy Birthday Buddy.
Posted by tulpen at 7:07 AM

Email ThisBlogThis!Share to TwitterShare to FacebookShare to Pinterest
Labels: Sigh